And the Oscars goes to… are the most precious five words, that take everyone’s breath away. The world once again is going to witness the mega star-studded night of the year. The dazzling 94th Academy Awards 2022 are on their way which will honor the diligent actors, actresses, and all the deserving movies of the year with the nominees. After the last year’s low ratings, let’s see if glamorous Hollywood will be able to return to its normalcy and amaze us.

And let’s hope this year the red carpet treatment will meet the expectation and raise the bar.

The countdown begins. The Oscars  2022 is going to be held at the Dolby Theatre in Los Angeles on Sunday 27th of the match. This auspicious ceremony will begin at 8 PM.

According to the Indian standard timing, it will be on Monday 28th at 5:30 PM.

The 94th academy awards will be broadcasted on star movies, star movies HD, and star world on 28th march from 6:AM( IST)

For the live updates, you can check the social media pages of the academy awards and it will also be broadcasted live on ABC and ET News on 27th.

For the last 3 years, there has been no host because of the unfortunate situation. But buckle up! This year there are not just one but there are 3 hostesses for the 2022 Oscars. The 94th academy award ceremony will be hosted by Wanda Skyes (comedian and writer), Amy Schumer (comedian and actress), and Regina hall (the actress who rose in the horror-comedy film series).

Well, all three actresses and a writer seem to have a  connection with comedy. So maybe this year we could expect some grand prestigious comedies from these powerful gorgeous ladies who will serve us with enormous belly laughs.

2021 Emmy nominated producer Will parker (his first involvement with the Oscars) has said that each woman brings something different to the show.

Check out the 2022 oscar promo and what the hostess has to say. 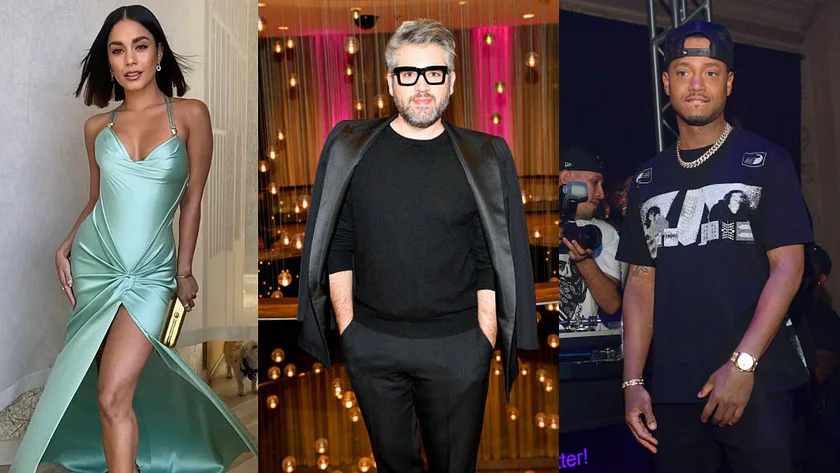 The red carpet is the official pre-show of the 94th Oscars on March 27. Let’s put an end to the curiosity about this year’s much-anticipated hosts of the red carpet show. The actress Venessa Hudgens, fashion designer Brandom Maxwell and the reality series Terrence J are being confirmed by the organizer to host the oscar’s red carpet show.

Swarovski (producer of glass) has teamed up with the Emmy award creative director and designer David Korins have designed the stage with 90,000 Swarovski crystals (glass-based). People have released the set design picture of the 94th annual academy awards which is nothing but a doozy. The oscar stage seems like a world of its own. A beautiful galaxy that is explainable. This year’s set design is bathed in fluorescent blue lights with swirling, geometric neonish lights that are twisting and turning against a black backdrop. The black and blue twirls look like the whales jumping out of the water. And instead of the row to row seats, they have designed a dinner theatre. The entire set seems like a magical place.

This is the most precious moment for all the Diligent actors, actresses, directors, music producers, screenplays, and many more people who have worked hard behind the camera.

There will be dresses and gowns that will have meaningful messages. The global sensational Priyanka Chopra also adds ups glamorous twists to her all-black desi saree but most importantly she will be the host of the Pre-Oscar event to celebrate south Asian excellence.

Even though everyone’s eyes were on Jai Bhim and Marakkar but it has been updated that they are out of the race and the fans are disappointed. But no need to be dishearted because the Indian feature documentary “Writing With Fire” has given the Indian an opportunity to be proud.

If you’re a fan of Beyonce, Billie Eilish, you wouldn’t want to miss the Oscars on the 27th.

The show producer Will Parker and Shayla Cowan has announced that Beyonce (Be alive), Billie and FINNEAS (No time to die) from the bond film, Sabastian yatra ( “Dos Oruguitas” from Encanto), Reba McEntire (somehow you do) will perform tracks nominated in the best songs category.

One of the best highlights of the event would be the honor given to the iconic film franchises like “James Bond” and “Godfather”. Because it has completed a milestone this year its legacy would be celebrated at the premier award night.

And even though the movie Enchanto’s song “We don’t talk about Bruno” couldn’t make it to the best original song category, there will be a grand performance of this hit song.

The Oscars  2022 runtime will be 3 hours. And the most drastic change and controversial decision made this year is to hand out the eight awards before the show and which will be edited into the live telecast.